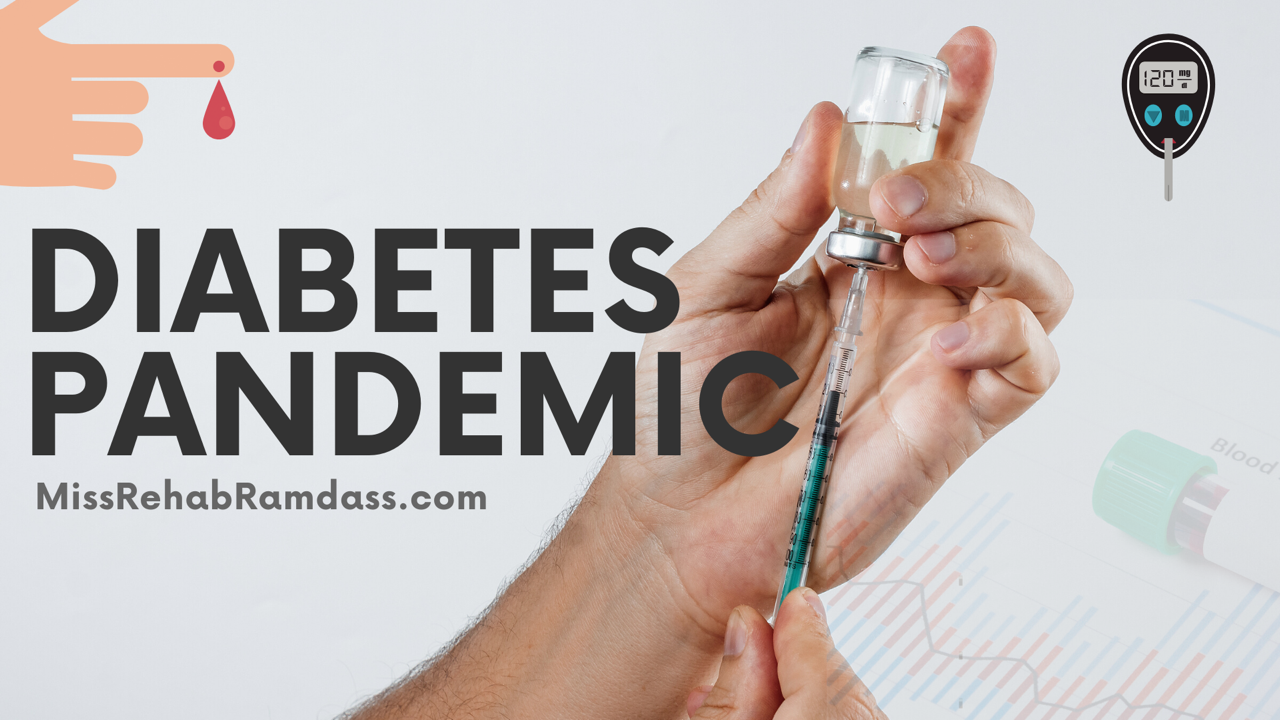 Diabetes is likely to be the Biggest Pandemic in human history. We often believe that this is a disease that we are bound to be cursed with just because our parents and our grandparents had it. I’m here to tell you just like Dr Neal Bernard says in his “Reversing Diabetes” book. Your genes do not have to be your destiny.

I’m so thankful for not having diabetes, but I did have a very close encounter with it through someone I love very very much. My husband Randy. Randy is an only child, whose parents are both diabetic. We both take our annual check ups very serious even despite feeling good and being in our 20’s (At the time).

The food on his plate for breakfast consisted of scrambled eggs on a white roll, and a bowl of frosted flakes or Apple Jacks with some cow milk. For lunch normally some rice and chicken, sandwiches from the deli, occasional McDonalds and for Dinner pasta, roti, and traditionally Trini fried foods. He commonly drank soda and migrated to Sprite Zero like it was a better option. He also had to end every meal with something sweet.

When he was 27 years old at his annual exam, his doctor calls him to let him know that he was pre diabetic. Which in simple terms means your sugar is higher than normal, but not high enough for a diagnosis. That was his wakeup call. My husband decided to go Pescatarian and cut off most processed foods, one year into being Pescatarian he decided to go fully vegan and we have never heard about prediabetes anything. His A1C number is at the lowest it has ever been, and his health is thriving. This is not just a story I had heard, this happened to my other half. Evidence that the real issue is that, we eat the same as our parents and their parents. Our traditions and the way that we eat doesn’t change. How do we expect to see different results? Isn’t that the definition of insanity?

I used the word Pandemic to describe what is happening in this country and around the world.

An Epidemic is an understatement as it refers to an increase in the number of cases of a disease in a population. Pandemic on the other hand refers to an epidemic that has spread over a wide area and affecting a high proportion of the population.

Let’s look at the numbers… In 1980 5.8 Million people were diagnosed with Diabetes in the U.S. Today 30.3 million Americans walk around with diabetes and 7.2 million don’t even know it (undiagnosed)!!

The numbers are even more astronomical when looking at the global numbers. According to The World Health Organization (WHO) in the 1980s 108 Million people worldwide had diabetes. As of 2014 it has risen to 422 Million. That’s over a 300% increase! And even that number is predicted to rise to 642 Million by 2040! If those numbers don’t send chills down your spine not sure what will.

So why is this disease the 7th killer of the world? In simple terms, when you have diabetes sugar is not able to pass from your bloodstream into the cells of your body. Sugar is glucose. Our cells use this glucose (sugar) as an energy source. Like gasoline to a car or fuel for a jet as Dr Neal Bernard describes. Glucose is our body’s fuel and if it can’t enter your cells it is depriving it of basic fuel. Glucose powers your movements, your thoughts and everything you do.

So, if glucose cannot leave your bloodstream to provide fuel to your cells than where does it go?

It builds up in our bloodstream and passes through your kidneys carrying water along with it. You’ll get thirsty because of this and become fatigued, sometimes you’ll even lose weight, not in a good way but because your cells are starving.

A mentor once told me if you feed your body at a cellular level disease could not emerge.

So, in essence you can be eating plenty of food but all of the nutrients will simply pass through your body and you can become mal nourished.

Its safe to say that the most common thing we hear in people with diabetes is that they must control their sugar intake. Well, now you know why. If sugar doesn’t get to its destination (your cells) and builds up in your blood stream, then Yes doctors will find a high level of sugar In your blood, which needs to be put under control.

Today there are several diagnoses as doctors are commonly discussing the results of their patients’ blood tests. One diagnosis is type 1 Diabetes and the other diagnoses it Type 2 Diabetes.

Insulin is a hormone produced in the pancreas. In Type 1 Diabetes, something has damaged the pancreas ability to produce insulin which means you need to get it from the outside like an injection.

Type 2 Diabetes is the most common diagnoses making up about 90% of the diagnoses. Your body produces insulin, however, does not use it properly.

The pancreas is an organ behind the stomach, in type 2 diabetes the body is able to make insulin but the cells in our body resist its actions.

You can be the next type 2 diabetes patient. Diabetes doesn’t discriminate on age, race, religion or sex.

My aunt Elida has Diabetes and she was told by her doctors to manage the foods that she eats like eliminating rice and yucca. But that was all they shared on food. She researched on her own and made some changes in her diet. She ended up hospitalized and found out she had high blood pressure and thyroid disease. She became very worried and started her meds. One of her doctors tried to put her on insulin but she refused. She changed her diet drastically and was able to manage her A1C numbers and keep it under control. So instead of helping the initial diagnosis and reduce medications, its the exact opposite. All this diabetes dieting was just a steppingstone to meds. Like mentioned,  she suffers from high blood pressure, which most people with diabetes do. Which is only a requirement for even more meds! Recipe for disaster! Huh?

The big question is. Is it reversible? Can the way that we eat have such an effect that it can all in all reverse the disease? Can some of the foods that we eat reactivate their ability to produce insulin and open the door to get through to our cells?

Well! I saw it firsthand with my husband before it got any worse. Even more so, Dr. Bernard argues in his book that you can in fact reverse type 2 diabetes. He states that the western diet is the culprit of this disease. Animal fats and vegetable oils.

There is evidence and plenty of research that proves that eating Vegetables, fruits, whole grains, legumes, beans and carbohydrates can help reduce the usage of insulin and even entirely get rid off it.

DR Bernard states in his book that the evidence of diet changes is powerful. However, the power of using food is neglected because of the marketing of pharmaceuticals. They have dominated medical practices so much so that many doctors focus very little on diet and exercise which are clearly very effective. What threw me off my chair was that these companies are luring doctors with expensive dinners to listen to presentations of their drugs. Even if Doctors don’t want to attend, they are required to attend medical courses to maintain their hospital or university affiliations. Which makes it extremely hard for Doctors to stand up against what they truly believe or how they would like to practice.

Drug companies have literally cornered the medical industry and its educational market.

I guarantee you that there is someone close to you that may already be fighting the disease.  Sticking needles into their bodies has become the new norm. This won’t go away until we make healthy conscious eating choices.

The point is that Diabetes is a reversible disease

My favorite quote from the book:

“The beef industry has contributed to more American deaths than all the wars of this century, all-natural disasters, and all automobile accidents combined. If beef is your idea of “real food for real people” you’d better live real close to a real good hospital”