A Scar To Remember 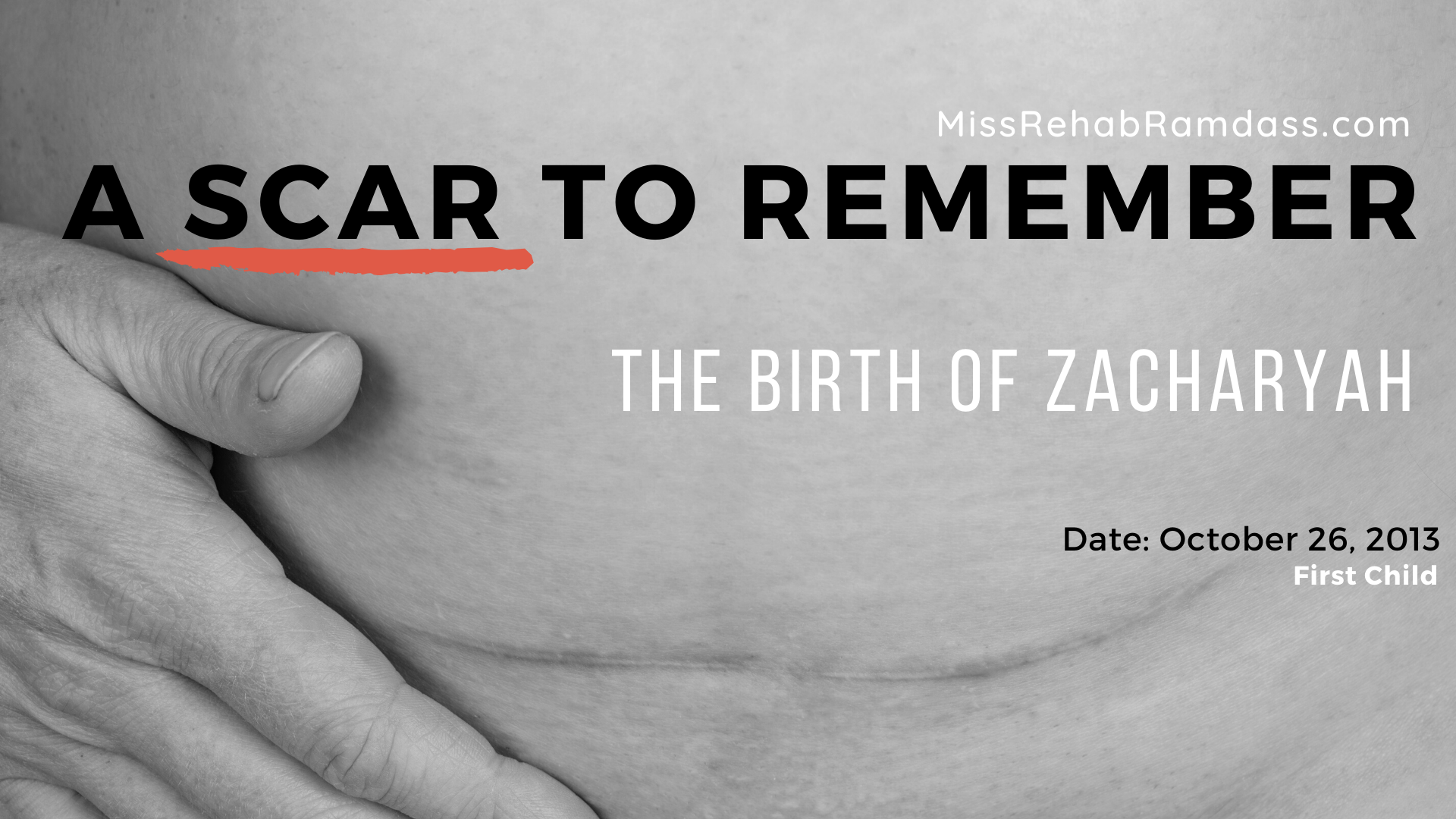 17 Jun A Scar To Remember

Pregnancy is supposed to be a time in a women’s life where they’re oozing with joy at the thought of having a baby in her arms after 9 months of pregnancy.

I was blessed to experience just that with my first son Zacharyah. I was 23 years old, a first time mom and oh so excited to meet my baby boy. My due date was November 2nd of 2013, but Zach decided to come a week early. My water broke in the middle of the night, we arrived at the hospital and 9 hours later still sitting in triage no contractions were coming and i was only dilated 2cm.

The doctor came in and shared that I would have to be induced because to many hours had passed and my body was not in active labor. That being induced would help give my body a kick start into labor. They mentioned that my water had just broken and that was it.

Induced me they did and sharp contractions started to come. I received an epidural which by the way was encouraged to alleviate the pain. And boy did it? I felt pressure when contractions came but not really any pain. A few hours later about 8 doctors were speaking directly outside of the room and then stepped inside. They mentioned that Zacharyah’s heart rate was dropping quickly. They had me turn into several different positions but no improvement was made.

I’m sure you can guess what happens next, because believe it or not this story is all way to common for many moms. I had to undergo an emergency c-section to ensure the safety of the baby. I immediately started to panic. I had never had a surgery in my entire life, let alone this HUGE invasive surgery that I was not mentally prepared for. I will never forget the nurse taking me into the OR in the stretcher. I can tell my mom was holding her tears as they took me away but the look in her eyes spoke a million words. I started to have an anxiety attack which I had never experienced before. My mind was trying to tell my body to calm down but my body was shaking, breathing heavily, and crying uncontrollably. The doctor said you’re in good hands try and relax. His words meant nothing and when my then boyfriend Randy finally walked in I felt some comfort. The epidural they had given me before to alleviate the pain was upped in dosage, i felt a cold rush go down my legs and completely lost feeling from my breast down.

I remember it being the craziest feeling to try and move my toes but not being able to.

Before I knew it after feeling some tucking and pulling as i laid in the bed with tears running down my eyes Zach was out.

A beautiful, healthy boy! It was the happiest and scariest day of my life! When I finally got to see my precious boy, the anxiety, pain and fear went away. I was processing my first moments as a mom to this little being that was going to depend on me for everything. He became my everything.

October 26 of 2013 was definitely a day to remember, a mixture of the happiest and scariest moments of my life. Little did i know that having the surgery was the least difficult part of the journey. What came next was the recovery process and lets just say it was NOT fun.

I remained a total of four days in the hospital. The first day I couldn’t get up until the anesthesia wore off, the second day they took out the catheter aka the peeing tube. I now had to go to the bathroom by myself which by the way was the strangest feeling in the world! You feel like your organs are scattered all over the place and confusion settles in alongside the pain. My first experience in getting out of the bed was oh so painful! I couldn’t laugh, take deep breaths and if i had to sneeze kill me right then and there!

The ride home after the few days from the hospital were hell! We drove from Washington heights, uptown where i gave birth all the way to queens where i was now living. Let’s just say i cried just about the whole ride. If you live in NY you know there’s no such thing as a smooth road. The doctors prescribed Ibuprofen and acetaminophen to help alleviate pain, and if you know me you know that i never take pills. Well lets just say that I could not have gotten through what i did without those drugs.

Zach was such a blessing as he slept thought the night, but for me nights were rough trying to find my comfort.

I was blessed to have a c section scar that healed beautifully from what it appeared on the exterior. On the interior in the weeks to follow i struggled with internal pain but i slowly started to feel more like my normal self.

I had asked myself how did this happen? How did my mom deliver 7 kids naturally with no epidural?! How did my sister have 6 kids naturally and this never occurred to her. I was young and healthy and was confused as to how my story quickly shifted to the operating room. Would i have had a natural labor if i had challenged the doctors choice of inducing me? I couldn’t change the outcome and i guess what mattered was that my baby was healthy.

A cesarean section was once a very rare way to deliver a baby. Today 1 in 3 pregnant women give birth in a operating room. Which translates to 31.9%. That’s insane?! What’s even more crazy is that in my research i came across a geographic map of the planet and countries with the highest C-Section rates. To my surprise, both of my parents birth country the Dominican Republic was the highest in the world at 58.1% of all deliveries being via c-section!!! That’s more than half! WOAH!

Since 1990’s C-sections have more than tripled and yes as countries increase the number of C-sections they provide, mortality rates do go down which is amazing! My son clearly reacted to my induction which lead to a cesarean, so I Just cant help but wonder if hospitals truly have their patients best interest at heart when making these decisions. I honestly think that my induction was given to prematurely without medically justifiable reasons. This has become a bigger concern as years progressed and the hopes of a growing family. There is no specific number of cesareans one can safely have because every women is different. But the more you have the higher the risk, the expert recommendation is to adhere to maximum of three.

According to a research by Trinity college Dublin on C-sections, based on 20 countries found that unfortunately some Doctors prefer a c-section because it is more convenient and organized and about 70% of doctors are afraid of being sued.

With all of this to consider like everything in life there’s that counter balance scale with pros and cons.

As mothers, clearly the desired outcome is to have a healthy and safe delivery but i encourage you to understand your patient rights and voice your concerns and questions. Make sure you are satisfied with your choices before any medical decisions are made for you and your baby.

I am so grateful and thankful that Zacharyah today is a healthy and active 7 year old. The years have raced by so quickly and i often think about the day he was born. I had an idea of what a C section was, but having an idea and actually having to make a decision in a short period of time are two different things. My vision for motherhood has always been natural birth as my mother, aunts and sister experienced just that. I always assumed i would follow suit and deliver my kids the same way.

That little scar in my lower abdomen will always carry a story of how my son entered the world. It will forever be A Scar To Remember.